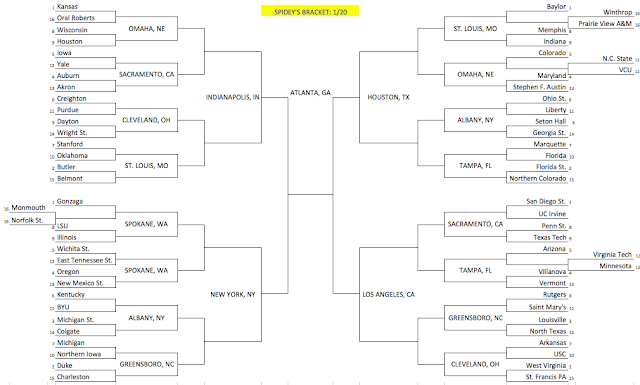 Posted by Crisler Spider-Man at 12:21 PM No comments: Links to this post 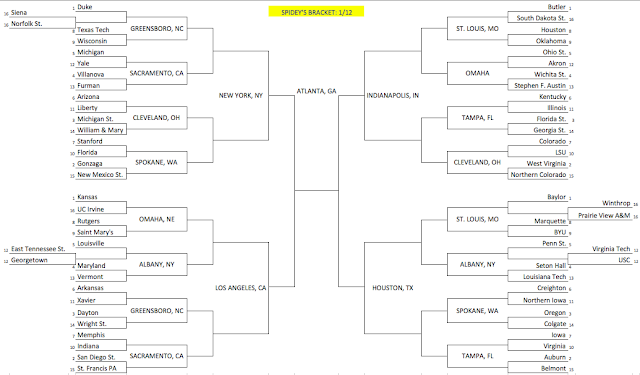 Posted by Crisler Spider-Man at 2:55 PM No comments: Links to this post 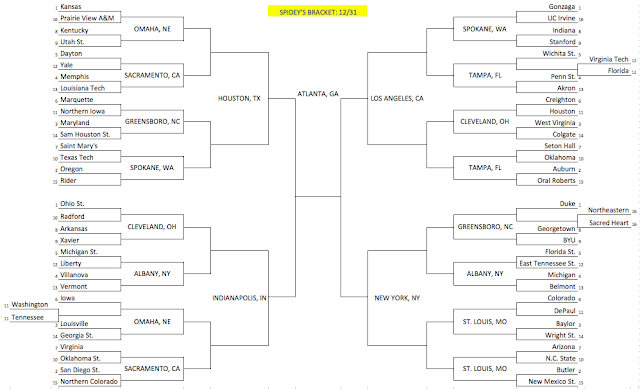 Posted by Crisler Spider-Man at 2:57 PM No comments: Links to this post 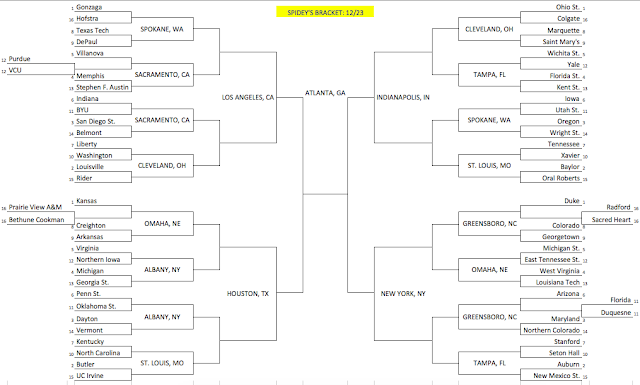 Posted by Crisler Spider-Man at 12:04 PM No comments: Links to this post

The non-conference season is approaching its close. This is your last jam-packed grid of non-conference games before things trail off for Christmas next week, followed by conference play getting going the week after that. Let's see what we've got this week:

Oklahoma-Creighton should be a close game, but the shine on this one has faded quite a bit since the season began. Both teams look to be near the outside of the bubble, so they could both be desperate for a nice non-conference win.

What's this? The 2017 National Championship rematch doesn't even take precedence over Saint Mary's-Arizona State? It was a top-10 matchup at the beginning of the year, but honestly UNC has fallen so far after losing 4 of their last 5 games that they are down to an 8 point underdog against the Zags. There's still good game potential there, but I have to instead recommend checking out the other good WCC team and introducing yourself to Jordan Ford and the fine-tuned Saint Mary's offense. Earlier in the evening, ranked Tennessee has to follow up a hideous outing against Memphis with a tough road game in Cincinnati.

Seton Hall has struggled a bit, losing their last 2 games after incredibly named Sandro Mamukelashvili went down with an injury (including an embarrassing blowout to Rutgers), but they've got really good bounce-back potential in a home game against Maryland, featuring another awesome point guard duel for Myles Powell, this one against Anthony Cowan. Later, undefeated Auburn somehow made it 9 games without playing a single power conference opponent, but that changes as they host a solid NC State team.

Not much tonight. Make some Christmas cookies or something. 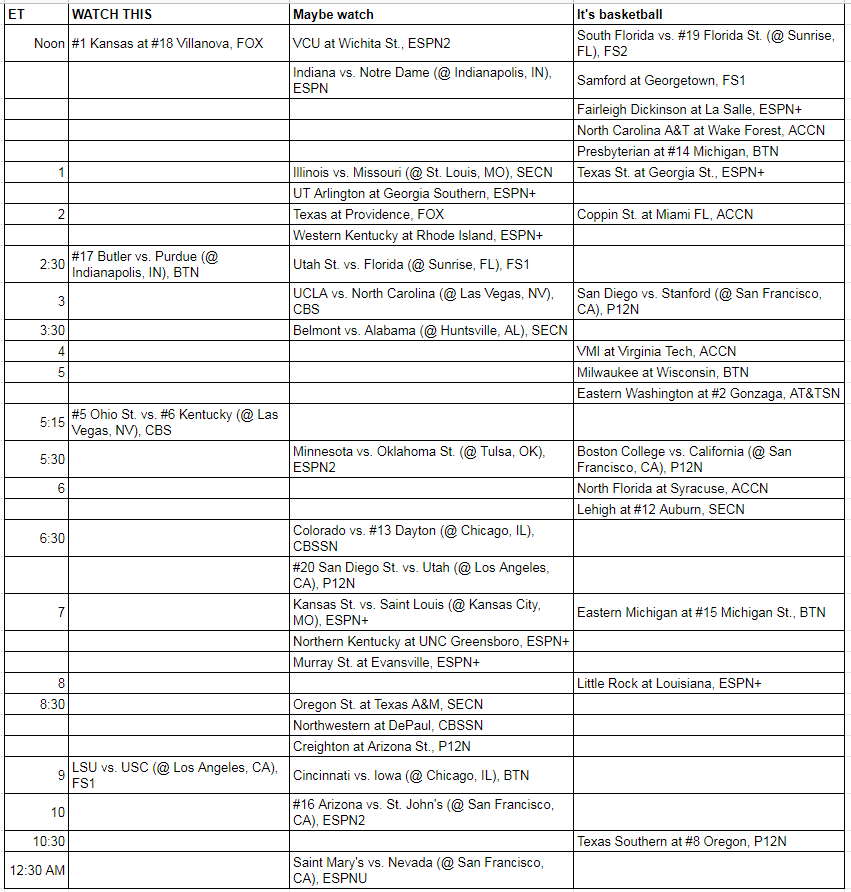 A jam-packed pre-Christmas buffet of quality games to choose from today. I have no idea how Villanova got Kansas to agree to come play them in Philly, but as a neutral fan I'm not going to question it. We'll see if this time Kansas remembers to defend the 3 point line against the Wildcats. Next we get an epic showdown in the Crossroads Classic, which is always a treat when it happens to get the two best teams in Indiana playing each other. After that, a Final Four quality showdown in Las Vegas, as Kentucky gets their first crack at a team with a pulse since opening night against Michigan State. That wraps up the super epic showdown portion of the day, but if you still haven't had your fill by that point, LSU-USC should provide quality late night entertainment without the gravity of the earlier games.

A calmer Sunday after a busy day of games Saturday, the one highlight today is Xavier trying to notch one power conference win in their 3rd try before heading into conference play. Nothing else really jumps out, although somehow we are not done with early-season tournaments, as the Diamond Head Classic kicks off in Honolulu, for some reason.

I'm not going to do a formal Watch Grid post next Monday since there are just so few games during the week next week, but I'll tweet out individual grids on Saturday and Sunday for the sake of completeness. Until then, enjoy the games this week!

Posted by Crisler Spider-Man at 2:19 PM No comments: Links to this post

Welcome back to the Watch Grid, where we've reached the part of the season where most of the games are just regular ol' non-conference games. No conference vs. conference challenges, no preseason tournaments (a few neutral site games though), just teams that scheduled each other because they wanted to. The quality of games will slowly decline until around New Year's, where they will abruptly pick back up again. Let's take a look:

Hmm I don't think so. Minnesota-Iowa could be interesting, but neither team looks anywhere near a tournament team right now.

One of my favorite types of regular season games in college basketball is "top 10 team plays a road conference game against a good but not great team." The hit rate of upsets in these games is really high, and although Maryland just flipped to a 1 point favorite on Kenpom, I would consider Maryland-Penn State the first such game of the year, and it should tell us a lot about both teams. Later, undefeated Butler faces their biggest test of the year so far in Waco.

Another game that meets the same description above, Illinois needs to beat Michigan to avoid falling to 0-2 in conference. Like Maryland, Michigan is still a 1 point favorite, but the two teams have been heading in opposite directions since the start of the year. Hopefully Michigan fares better in Juwan Howard's first conference road game than they did in their first non-conference road game.

We need a nickname for the basketball edition of the Iowa-Iowa State rivalry that isn't El Assico. Because unlike their football teams, the basketball rivalry regularly produces competitive, exciting games and not the magnificent parade of incompetence we know and love in football. Anyways, this game should be pretty good.

Unless you're from the state of Colorado, you can skip tonight. 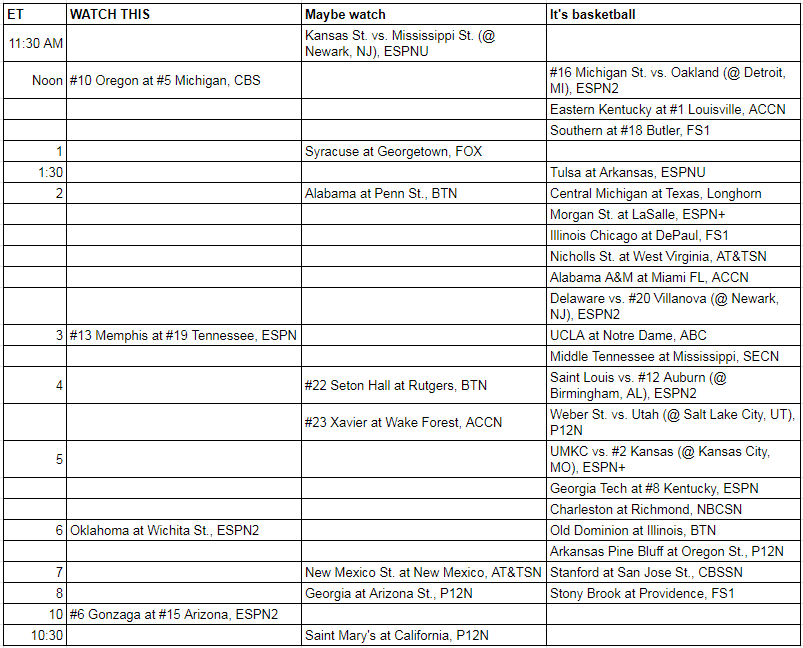 Wow, that's a lot of games. The true end of the college football regular season pushes more basketball games to TV, but honestly the quantity of really good games is probably a bit less than the past 2 Saturdays. The top is strong though, with Michigan and Oregon giving us the "best game that didn't happen in Atlantis," while Michigan goes for revenge for the 2017 Sweet Sixteen. Next, the Tennessee state championship should be a lot of fun with the teams much closer in quality than they were last year. After that, Wichita is on an amazing quest to beat every DI team from the state of Oklahoma. They've already beaten Oral Roberts and Oklahoma State, they play Oklahoma here, and they get 2 games against Tulsa in conference play. They are favored in all of these games. This is now the thing that I will become way too invested in this season. After dark, Gonzaga tries to continue it's dominance over the Pac 12 and gain another transitive conference championship.

Oklahoma State-Houston could have late season implications if both teams end up on the bubble, but having not watched either team play this year I can't really tell you anything else interesting about that one. Meanwhile, OSU-Minnesota doesn't quite carry the upset alert of the previous 2 Big Ten games highlighted in the grid (Minnesota does not qualify as a "good but not great" team), but any conference road game can be a tough challenge, which provides mild intrigue here.
Posted by Crisler Spider-Man at 4:41 PM No comments: Links to this post

We're back to regularly scheduled Watch Grids here, where I don't have to look up the schedule every single day and can instead do an entire week at once. I also can go back to just typing team names and not having to constantly look up what country a game is being played in and whether or not there are more games after that one not currently being listed. Anyways, here's this week's grid:

Nothing too notable today. The Big Ten/ACC Challenge kicks off with some mid-level games, before the really interesting ones happen later in the week.

Now that's more like it. While Kenpom has both Louisville and Michigan State as pretty significant home favorites, there's still a lot of preseason projections worked into those predictions, which don't yet fully account for a vastly over-performing Michigan and a slightly under-performing Michigan state (relative to preseason expectations).

The fun keeps rolling tonight, as Virginia's historically dominant defense and historically slogging tempo faces their first top 50 team of the season. Will Purdue get to 50 points? Kenpom says no. The late shift might give us our game of the week, as undefeated OSU heads to Chapel Hill for what should be an awesome matchup. But if my theory of Ohio State living out the exact plot of last year's Michigan team holds up, the Buckeyes should win in a blowout.

Aaaand the challenge is over so there are no good games tonight.

Friday has potential to be interesting, with those weird December conference games happening in the Big Ten and ACC. Duke lost in Blacksburg last year but is a bigger favorite this year, and Michigan-Iowa on a Friday night always has weirdness potential. Meanwhile I have no idea why TCU is playing a game in their home city but not on their home court and I don't feel like looking it up. 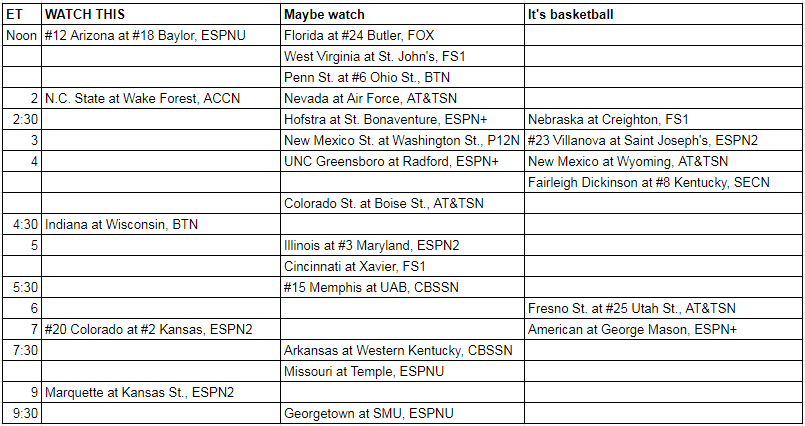 Well look at that, our first loaded Saturday slate! The early game between Baylor and Arizona is probably the most interesting game of the day, with two teams that look greatly improved from last year. NC State/Wake might be a matchup of 2 NIT teams, but it's the best we've got in the early afternoon window. I'm particularly interested in finding out if Indiana is any good as they travel to Madison, since the best team they've played so far this year (by far) is Louisiana Tech. Colorado taking their undefeated record into Phog Allen will probably not go well for them, but stranger things have happened. Finally, ending the night with watching Markus Howard need to score 40 points on 30 shots is always recommended.

We finish off the week with some rare Sunday evening excitement. UNC/Virginia is always a fascinating clash of styles (although after watching Michigan's defense handle the Tar Heels, I have a feeling Virginia is going to suffocate them). Gonzaga heads to Washington, who really shouldn't be ranked, but will still give the Bulldogs a solid test. And if after all that you still want one more game, enjoy the bizarre experience of Iowa State and Seton Hall playing each other for the second straight game (The Pirates won the 5th place game in Atlantis before traveling back to New Jersey for a previously scheduled matchup).
Posted by Crisler Spider-Man at 2:41 PM No comments: Links to this post